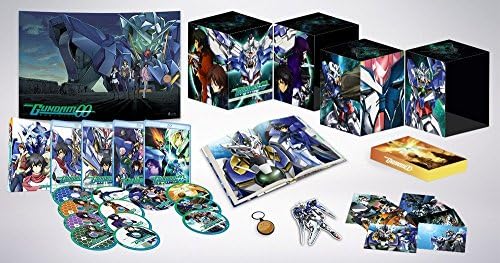 Mobile Suit Gundam 00 10th Anniversary Ultra Edition Blu-ray contains episodes 1-50 of the anime directed by Seiji Mizushima, the A Wakening of the Trailblazer Movie, both OVA series, plus a 236-page hardback art book, 4 double-sided art cards, a fabric poster, a Haro metal keychain, a large car magnet and an amazing chipboard box! The year is 2307 A.D. While the Earth’s reserves of fossil fuels have been depleted, humanity has obtained a new, nearly infinite source of energy to replace them in the form of large-scale solar-powered generation systems based on three huge orbital elevators. However, the benefits of this system are available only to a handful of major powers and their allies.These orbital elevators belong to three superpower blocs: the Union, the Human Reform League and the AEU. These confederations continue to play a grand zero-sum game for the sake of their own prestige and prosperity. Thus, even in the 24th Century, humanity has yet to unite as